The first real 3D dive simulation for mobile devices lets you realistically dive the Zenobia wreck in Larnaca, Cyprus,  well known worldwide as one of the top 10 wreck dives.

A unique scuba dive simulator for all of you awesome divers is here!  Sit back and enjoy the experience of virtual diving while the only equipment you will need will be just your mobile device, but get prepared, you might get ideas to book the next available flight to Cyprus just to see the real thing with your own eyes!

Living in the technology era, meeting people is easier than ever, so we arrange a meeting in the internet highways to get to know the person behind that app. 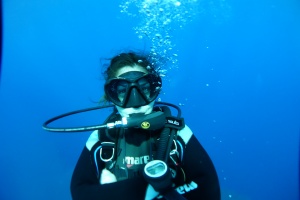 My name is Kalia Aristidou. I live in Cyprus, I am a diver, and the creator of the app Scuba Dive Simulator: Zenobia.

How did you come up with this idea?

It all started when I came back to Cyprus in 2007 to finish my thesis case study, in order to gain my bachelor degree in Marine Sciences. I had to find a place to map the marine life and when I asked people to suggest a place, all I was hearing was “go to Zenobia wreck”. Back then I had no clue what was the “Zenobia wreck”. My first dive at Zenobia was a mess. I went with a video camera, cameras in 2007 where huge, and a measure tape, in order to collect data for the marine life. Had no clue how the wreck is positioned and where I was, and what I was doing there! The second dive I decided to go as a visitor. I had to understand why this wreck was so popular, and I realized why. It was awesome! From then I started collecting all kinds of data: marine species, ecology, the stories of the sunken Zenobia. I started writing a book about all that staff that I found interesting as a diver. Countless hours crafting the data. I finished several chapters but then, life happens. Got a cool job with scuba diving and lots of interesting staff, and the plan of publishing that book was fading away.  At 2012, by chance I learned that a new master about video games will be offered by the Cyprus University of Technology. That was the epiphany moment! I remembered again that dream of publishing that book, but now I had a twist: transfer all that data from plain paper into a virtual interactive environment. Got accepted at the master, and quit my job to be focus on learning totally new staff. My master thesis was to prototype the simulator. The prototype version even won at Microsoft Imagine Cup local finals. 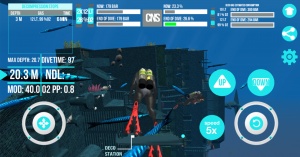 What is Scuba Dive Simulator Zenobia?

It is an app where you can learn, plan and dive to Zenobia. Is a totally new concept of “Plan your dive and Dive your Plan”. It looks like a game but in reality it has features of an app. You can choose up to 3 gasses, from 21-99% oxygen, and dive to a 3d replica of the wreck.  During diving, a dive computer will feed you back all that data that are crucial during a real dive, like the no deco limit, deco stops, remaining gas, central nervous system toxicity, current depth, maximum depth and many others. Also the dive computer predicts if the remaining gas and CNS will be critical at the end of your dive. While diving you can explore the wreck, both outside and inside. In the internal areas, I included only where you can see a clear exit for safety reasons. These areas are the upper car deck, the cafeteria, and the bridge. Additionally, you can see some of the real marine life of Zenobia, according to their real habitat, and by tabbing on them you can learn a few things about the buzzard marine world!

When you finish each dive, the dive profile is saved and you can see or share it with your buddies at any moment. There is also an e-book where I included the last days of Zenobia leaving in the surface world, and a detailed list of the marine life.

See below to read more about the Dive Simulator: Zenobia and a video description of the app

How difficult was to develop such project?

We noticed that there are two versions of the app in the play store. One is free, and the other is paid. What is the difference between them?

Yes, the paid version does not contain ads, no in app purchases, and no locked items. Since you buy it you will not spent a single cent extra while using it. The free version contains video ads, where you have to watch one video for every dive. I wanted the app to be clear of banners because they abstract you from getting the full experience so single video ads was the best I could do to deliver a free version. Also in free version you start with a 10 lt tank, and the more you dive you eventually unlock all the backgas and deco tanks. The only thing you buy in the free version enabling the Nitrox and surface air consumption rate option for the backgas tanks, at the price of 1.4 euros. All the rest content of the free version is the exact same with the paid version.

How long did it take to develop it?

Since I had all the necessary data, it took about 1 year of full development, and since then is almost a year of constantly updating, improving, and implementing new features.

At this moment is available only for android devices. The next step is to port it also in iOS devices.

A few words about Zenobia wreck?

Learn more about this app in the video below.