If you have treasure hunting in your blood and looking for a little adventure …This may be the opportunity of a lifetime.

Capt Fismer, the “Fizz”, is a world famous Treasure Diver with over 40 years of treasure search and salvage experience. He is among the most respected and knowledgeable diving professionals in the world. Having worked on over 300 shipwrecks in the US, his expertise is shipwrecks, specifically Spanish shipwrecks.  He has even had his own show “Treasure Divers” and has been seen on Pawn Stars as a treasure authenticator. 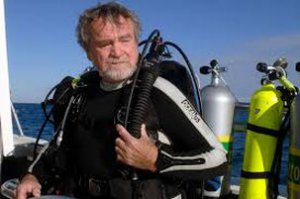 Listed below are some of the major wrecks that Capt. Fizz has worked on:

Carl took Arthur C. Clark on his last diving trip and is the consultant on the Taj Mahal Treasure.

Carl Fismer worked with Mel Fisher on the recovery of the 1622 Spanish galleon Santa Margarita and the Atocha in Key West waters.

Carl has worked on the 1715 Fleet on and off for the last few decades.  Carl has salvaged millions of dollars from the 1715 Fleet.

Carl learned his craft on the 1733 fleet from the grandfather of modern day treasure diving, Art McKee.

Carl Fismer led the second expedition to Silver Shoals, 70 miles off Dominica, where the famed galleon Concepcion sank in 1641.

Capt. Carl Fismer is the real “Most interesting Man in the World” he is the real deal and not an actor. He is real motivational speaker, has had his own TV Show “Treasure Divers” and has been seen on Pawn Stars as a treasure authenticator.

Watch the video below for a glimpse of the Capt. at work ….

SCUBA WIZE was formed with the help of Capt. Fismer’s as well as other successful treasure hunters help to help others with treasure hunting and make their dreams come true. SCUBA WIZE  offers workshops and on site training on an actual Spanish Galleon. They share their knowledge of the history of treasure diving as well as how to find sunken treasure, get funding as well as the laws involved.

You too can learn to be a treasure hunter on an actual 1733 spanish Galleon…. find out how on ScubaWize.com

Read the entire article about Capt. Fizz and his workshops here on scubawize.com

Purchase your next dive trip from PADI Travel at our affiliate link below and receive a free $500 Hotel Discount Card that can be used worldwide for hotel stays , car rentals and excursions. --> http://forscubadivers.com/DivePadi Simply email proof of purchase for verification. Terms apply, see terms on your Hotel Savings Card email.