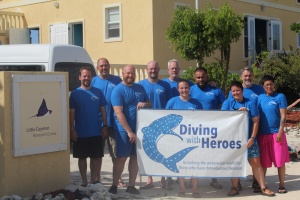 Diving with Heroes works with veterans and service members of the U.S. armed forces who have been injured during their service to the nation. These heroes have been certified to dive as a means of physical, emotional and/or social rehabilitation. The group came into existence in 2014 to ensure that the heroes’ rehabilitation and recreation did not end with certification but is instead carried over into their everyday lives.

“Having the DWH group here was fantastic,” said Peter Quilliam, CCMI’s Field Station Manager.  “They were so enthusiastic, doing everything from scrubbing coral pieces in our underwater nursery to culling lionfish, to helping our research staff on their research projects.” 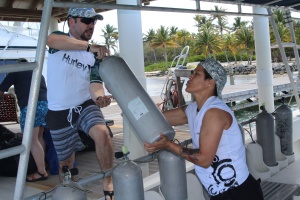 The group helped two University of Florida researchers, Steve Whalan and Paul Maneval, in building two different types of underwater framework for growing new coral.  One type, called a “tree,” is made from PVC pipe, and the other is a modified “dome” made of rebar.  The DWH team cut, drilled and applied their military expertise to making each project just a little bit better.

“The DWH team, especially Sergio, Aaron and Dani, really helped me with my project, “said Paul.  “They came up with some really good ideas on how to strengthen the dome to better survive the push and pull of the underwater currents.  Then they went out and applied those ideas to my project. It was a fantastic solution.” 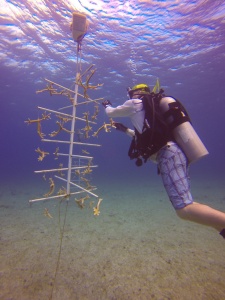 Three other hero divers, Brenda, Ken and Rob, assisted Steve in building a jig where the PVC pipes can be quickly and efficiently drilled.

“They did in about five hours what would have taken me a week or more,” said Steve Whalan.  With the drill jig they created, they drilled more than 100 ‘branches’ for my underwater ‘tree.’  Plus, I still have the jig, so when I need to make the next tree, it will only take hours, not days!”

The Diving with Heroes group also assisted the researchers in cleaning the underwater nursery.
“It’s sort a mindless task,” said Katie Correia, a CCMI staff member and one of two dive leaders for the week. “You have small, toothbrush-sized brush and you spend 40 minutes at about 25 feet, scrubbing the PVC pipe, the monofilament holding the coral piece, and picking snails off the coral itself.”

“We do this cleaning about every two weeks,” said Tom Sparke, another CCMI staff member and the other dive leader for the week.  “I can tell you with absolute certainty, the coral nursery has never been cleaner.  The DWH group were fanatical about doing their mission to the best of their abilities.”

Many wounded or injured veterans, besides suffering their injuries, often feel rudderless after being evacuated from their unit.  They no longer have a battle buddy (you watch over them as they watch over you, each making sure the other has all the proper gear for whatever situation they may find themselves) and they no longer are part of group with an overarching mission. This DWH excursion attempts to replicate both.

“Each diver is assigned a dive buddy for the week, making them responsible for checking each other’s gear, working on projects together, even cleaning up after each meal together,” said Jill Hottel.  “We also begin the trip by discussing the mission and measures for success.  For this excursion, it was to assist the researchers, clean the underwater nursery and hunt lionfish, an invasive species of poisonous fish.”

“It was a great trip,” said Aaron Kirzner, one of the hero divers.  Kirzner, a medically separated Army Military Policeman, went on to say, “DWH is a phenomenal group, working to assist veterans in transitioning to post-injury life.”

Ken Shere, the only Active Duty member on the excursion, said diving is the only place where he feels no physical pain.  “Underwater, I can do anything!”

Medically retired after being injured three times in combat, Sergio Trejo began diving only a year ago. “Diving gives me a sense of purpose, a passion to follow.  Since I got certified, my wife did too and my children are in the PADI Seal program.  It’s a family passion now, connecting all of us in another way.”

According to Jill Hottel, Executive Director of Diving with Heroes, the six hero divers were:

The volunteer divers were:

Diving with Heroes is a 501(c)(3) charitable organization whose mission is to unlock the underwater world for those who defended our freedoms.

“Our group provides opportunities for heroes and their families to experience the freedom and wonder of scuba diving,” said Jill Hottel.  “We enable heroes to continue their adaptive scuba training and realize its therapeutic and social benefits through rehabilitation and recreation, and to promote and encourage a lifestyle of diving.”