Just the thought of being swallowed by a whale makes me cringe.

In all seriousness, you would think that it is somewhat impossible to end up in the mouth of a huge whale.  Well.. stranger things have happened.

Simon of curiosity.com  comments on a video clip of two scuba divers that narrowly missed getting swallowed alive by humpback whales. 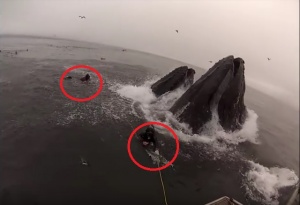 Two divers are circled in red.

Simon proceeds to explains in detail what would happen if you were accidentally swallowed. He explains that the least of your worries would be ending up in the belly of the whale.

See video clip on the next page below for an amazing description of what would most likely happen if these divers were swallowed.