Google has released the first underwater 3d map of the Great Barrier Reef.

These images can be accessed via Google Maps. The Great Barrier Reef was the latest addition to other Google underwater maps that already allow virtual dives of other reefs around the world. 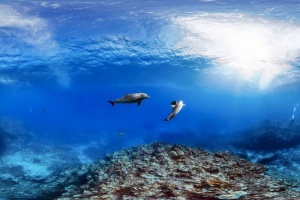 It is hoped that these maps will allow many more people around the world to explore the natural wonders of our Oceans.  Thereby providing an  increased an awareness of responsibility to protect these natural wonders.

Australian researchers Catlin Seaview Survey teamed up with Google to create the database, which allows people to virtually dive the World Heritage Area.

The site will also log how the reef currently looks to compare its state after threats like cyclones or global warming.

“The camera used for the survey is something that was specifically designed for this project,” he said.

“It allows us to take full 360 [degree] images every three seconds as we’re traveling along reef environments.”

Read the entire story on abc.net

Watch this video to see how this was accomplished.

Other Related Posts that you must see: