There is a reason that we are often cautioned regarding interacting with marine life, especially feeding them.

Well, idivecayman.com put together a rather convincing article that describes some of the unintended consequences of such actions. They site, as an example, the consequences resulting from the culling of lionfish.

Lionfish are are a menace and considered  an ecological disaster, as it’s put, in the Caribbean since they were first introduced in around 1985.  Lionfish are not native in these waters and so they don’t have any natural predators in and around the Caribbean.  They are voracious eaters and prolific breeders and they are wiping out populations of reef fish.

In order to alleviate this problem with the expansion of the lionfish population divers and fishermen have been culling them.  This is not a problem in and of itself.  In fact, lion fish are quite tasty.  However,  the problems begin with divers and spear-fishermen feeding other fish their culled lionfish catch. This practice negatively alters marine life behavior and puts both divers and wildlife in danger.

Read on below for more details about how this altered behavior potentially puts divers at risk.

Grand Cayman has a lionfish control program that is run by the government’s Department of Environment (DoE) which now forbids anyone feeding lionfish to marine life. Cullers are not even allowed to leave dead or dying lionfish on the ocean floor. No matter how small, any captured or speared lionfish have to be removed from the ocean, that’s the law.

But why? Surely if we are killing lionfish then whatever we do with it when it’s dead doesn’t matter? Let’s go back to the DoE and what they are tasked with, first off, their mission from their website:

The Mission of the Department of Environment is to facilitate responsible management and sustainable use of the natural environment and the natural resources of the Cayman Islands; through environmental protection and conservation, wise use, scientific research and public education.

And that pretty much sums it up, feeding lionfish to other species is reported to have a number of negative effects on the indigenous marine life and the safety of divers. Read the statement above again and the reasons behind the subsequent ban make more sense.

Furthermore, the idea to make predators eat lionfish by feeding them didn’t work anyway. Predators will happily eat a lionfish off a spear but in spite of having been fed them for years, the documented cases of them hunting the invasive creature of their own free will are very much the exception as opposed to the rule.

One negative effect of feeding dead and dying lionfish to other predators is that their behavior has been altered to their own potential risk. A good example is our friendly mutton snapper who are usually only a few feet away on every dive. They love the sound of bubbles, because to them it means food. So if someone is spear fishing while scuba diving (which is illegal in the Cayman Islands but in spite of the DoE’s best efforts, people continue to break the law) then the mutton snapper swims straight up to them hoping for a free meal but instead gets shot and dies.

The Vimeo video referenced in the link below below depicts divers feeding marine life  as well as the marine life behavior that results from this practice.
Marine Life Harassing Divers from iDive Global on Vimeo.

Click below to watch this directly clip on vimeo 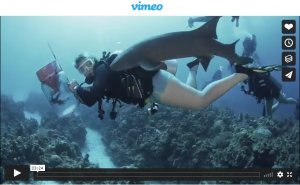 In the following video below we see a shark that most likely associates the diver with a free meal, while the diver interprets the shark’s actions as an attack .