One might consider the “Gallery-ization” of Florida wrecks with photos a new trend.

That is right, it has only been a few days since one of our previous posts about transforming the Kittiwake wreck to an underwater gallery was posted to our Facebook page.  Now, apparently there is another one.

The Florida Keys News Bureau just released a video and press release about the hanging of artwork on the Gen. Hoyt S. Vandenberg.  The Vandenberg wreck is the world’s second largest artificial reef and it lies 90 ft. below the surface in the Atlantic Ocean off the coast of the Florida Keys. 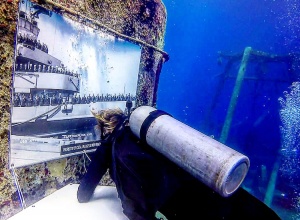 What is going on? Is this a new trend? Baesd on these recent news bulletins and our previous posts about another Florida wreck, the USS Kittiwake, being transformed into an underwater museum … seems to be a developing trend… Yes?

See next page below for video of this conversion process

Over the previous weekend over 12 plexiglass enclosed photos were installed…

Watch the following clip provided by the Fl. Keys Bureau for a glimpse of what is happening.

See Next Page below for BNO News coverage documenting this event on the Gen. Hoyt S. Vandenberg wreck

Watch the Bno News coverage of this transformation of the Vandenberg wreck into an underwater art gallery.