This is the first time I have seen anything like this where whale shark pursue a scuba diver.

The tittle of the video below is “Whale Shark Attacks Diver”, but I am not sure if I would use the attack word.  It seems as though the whale shark was persistently inquisitive, but certainly not attack mode.

Personally, I found this behavior by the whale shark somewhat surprising, but once again this is a case where the diver did appear to be too close to the whale shark before the shark became inquisitive. 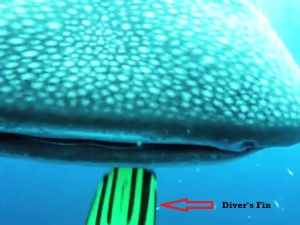 Supposedly the shark was attracted to the diver’s bubbles, but I can almost guarantee that the diver was somewhat fearful based upon the following video clip.

Watch this huge whale shark’s persistence in pursuit of the scuba diver in the video clip below.

Sorry folks, but I must say the diver did appear to be panicking based upon the amount of bubbles he was producing… yes?

See the latest updates about the validity of this video by Bill’s Channel: Whale Shark Attacks Diver -Real or Fake?

Well apparently the video is not a fake, but where this incident occurred, whale sharks have been trained to be fed by humans.  Local fisherman use a technique of hand feeding whale sharks to lure them away from their fishing nets as explained in the video below.  marine life exhibit similar behavior as interaction with humans alters their behavior and can lead to misunderstood scenarios such as these… See our related post Unintended Consequences of Interacting With Marine Life.