A group of 9 dive instructors out on a leisurely dive searching for Angel sharks managed to agitate an angel shark enough to get attacked.

Angel sharks are typically what is called an ambush predator. Unlike most other sharks which must continue swimming for water to pass over their gills fro oxygen, angel sharks are capable of  actively “inhaling” water to pass over their gills. This allows them to remain still on the sea floor and enables them ambush their prey as seen in the video clip below.

Angel sharks, however, are known for being quickly agitated, as these divers found out in the video on the next page below. 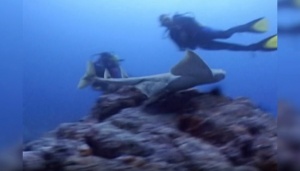 I am not certain about what exactly happened it , but the diver’s description of what actually happened seems quite plausible (the angel shark saw his reflection in the camera and felt it was being attacked)

Watch video on the next page below to see what happened and formulate your own opinion.