This amazing device called a Shark Shield is designed to create a 3 dimensional electrical perimeter around its wearer/diver.  This device sends electrical pulses that dramatically interferes with the sensitive muscle spasms in the electrical receptors in the sharks nose. 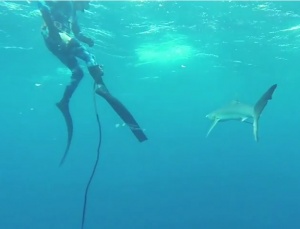 The device has been rigorously tested for over 20 years.  It is said to be the only scientifically proven device to deter sharks without harming them or affecting other marine life.

The devices are designed for adventurers and proven as an effective deterrent to sharks 9 out of 10 times.  Although most users of the device tend to  agree that sharks are not usually problematic, they do agree that the device offers peace of mind in “sharky” waters.  The Shark Shield device has been proven to work well for divers, surfers, swimmers as well as kayakers as demonstrated in the videos below.

The Shark Shield Freedom 7 has been proven to work for a number of water based sports Diving, surfing, swimming and kayak fishing.

Jim Sammons explains the Shark Shield promise in the video below.