Would you believe this .. giant pacific octopus is found feed on sharks.

The staff was able to capture amazing video of a pacific octopus’s capability to take down sharks.  This is rather unbelievable. 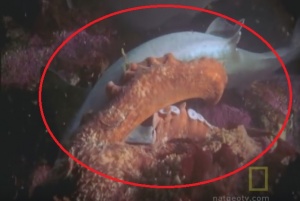 Bottom-dwelling octopuses eat mainly crabs, polychaete worms, and other mollusks such as whelks and clams. Open-ocean octopuses eat mainly prawns, fish and other cephalopods. They usually inject their prey with a paralyzing saliva before dismembering it into small pieces with their beaks. Octopuses feed on shelled mollusks either by using force, or by drilling a hole in the shell, injecting a secretion into the hole, and then extracting the soft body of the mollusk.

Watch this amazing video of a dogfish shark taken down by an octopus.