Surprisingly, the Ocean is not really as quiet as one would think.

The blue whale, the largest animal on earth, is also among the loudest animals in the ocean.  In fact these large mammals can emit sounds that reach 188 decibels ( 48 decibels louder than a jet plane). That is 68 decibels above the pain limit for the human ear.  Scientists believe that their sounds could hear from one end of the ocean to the other . 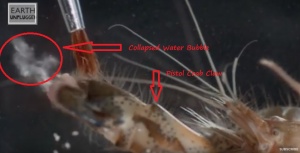 If that isn’t unbelievable enough, then you would be surprised to know that this little snapping shrimp generates more noise than blue whales by 30 decibels. In fact these little guys can make enough noises that can be heard for hundreds of miles, they can even disrupt the sonic transmissions of submarines.  The pistol shrimp actually turn sound into a weapon used to capture its prey.

Given all of this information it is easy to see how human noise pollution can interfere with  underwater communication of sea life. Scientists are initiating studies in order  to understand this oceanic cacophony.

Your Earth Is Blue: Sanctuary Soundscapes

Watch how the pistol shrimp fires a sonic blast to stun its prey in the video below.