The Maldives has awesome diving and free diving sites.

The Maldives is an island country  and archipelago in the Indian Ocean. It consists of a series of 26 atolls. 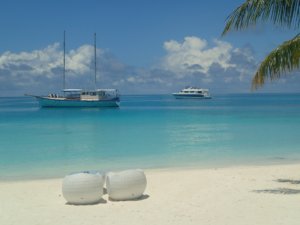 Maldivian waters are home to several ecosystems, but are most noted for their variety of colourful coral reefs, home to 1100 species of fish, 5 species of sea turtles, 21 species of whales and dolphins, 187 species of corals, 400 species of molluscs, and 83 species of echinoderms. Many crustacean species are there as well: 120 copepod, 15 amphipod as well as over 145 crab and 48 shrimp species.[71]

These coral reefs are home to a variety of marine ecosystems that vary from planktonic organisms to whale sharks. Sponges have gained importance as five species have displayed anti-tumor and anti-cancer properties.[73]

In 1998, sea-temperature warming of as much as 5 °C (9.0 °F) due to a single El Niño phenomenon event caused coral bleaching, killing ⅔ of the nation’s coral reefs.[74]

In an effort to induce the regrowth of the reefs, scientists placed electrified cones anywhere from 20–60 feet (6.1–18.3 m) below the surface to provide a substrate for larval coral attachment. In 2004, scientists witnessed corals regenerating. Corals began to eject pink-orange eggs and sperm. The growth of these electrified corals was five times faster than ordinary corals.[74] Scientist Azeez Hakim stated:

Watch the following video of diving and free diving the Ari Atoll in the Maldives.  This video was filmed with a GoPro Hero3 Black Edition by Nicolas Thiou,

Click here to find quick facts and details for planning your diving adventure in the Maldives by liveaboard or dive resort.

A selection of 35 liveaboards in the Maldives or 42 Travel PADI selected resorts with top notch dive operators on site or walking distance away from the resort.