Remoras are thought to be creepy blood sucking fish that attach themselves to a host  which is typically whales or sharks, but what about scuba divers? 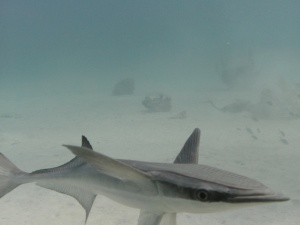 (Photo by Phil Colarusso, U.S. EPA Government photo free use). Remora attached to a whale’s back travels upside down

Remoras are not actually blood sucking leeches and they generally do no harm to their hosts. However, the thought of one of these guys actually attaching to a scuba diver is rather creepy.

Stranger things have happened, but there have been incidences where a remora will try to attach to a scuba diver as is seen in the video referenced below.

In the clip above, the diver explains:

The reason I’v uploaded this clip is after a discussion on Reddit and the fact that there (currently) are no other videos on YouTube documenting this rare phenomenom. The clip and an interview got featured by the Daily Mail (UK) 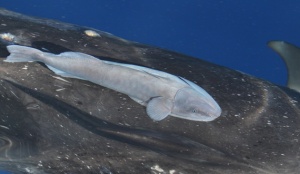 Encountering a persistent remora can be scary for a diver and possibly cause panic that can lead to a perilous outcome if not managed correctly.

See video clip of a persistent remora trying to attach to a scuba diver below.

This diver keeps his composure well when an inquisitive remora takes an interest in him.

Read On for more about these strange fish

They look creepy and slimy enough, as though they are sucking the blood of their host, but remoras are not giant leeches – it turns out that while not entirely benign, remoras do little harm to their hosts in normal circumstances.

They don’t even hang on with their mouths; instead one of the fins on top has developed into a gripping surface that is used to clamp onto a passing whale or dolphin. When viewed from above, the gripping disk looks like the sole of a running shoe, which the fish controls with the aid of tiny barbs that help hook to the skin. Some species can reach the length of over thirty inches.(Wikipedia).