The Dominican Republic’s underground river system offers  great cave diving  excursions. Although not as well known as those of the Mexican Yucatan Peninsula,  the word is spreading and the DR is now attracting the scuba divers from around the world. One of the favorite cave dives is the Chicho Cave. 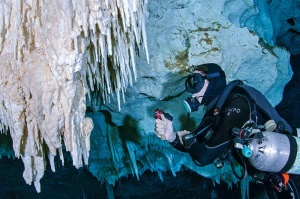 The Chicho Cave in Bayahibe, DR offers a crystal clear cenote below the DR’s Parque Nacional del Este.  Many of the caves that make up the underwater river system remain unexplored.

If you are and advanced or technical diver looking for adventure perhaps the Dominican Republic has something to peak your interest.

Read on for more details and a video clip of cave diving in the DR.

Our plan is a full-penetration dive into the first leg of Chicho Cave, a crystal-clear freshwater cenote that lies beneath the arid scrub brush of the DR’s Parque Nacional del Este (National Park of the East). Most divers know about the cenotes of Mexico’s Yucatan Peninsula, but few realize that similar systems can be found elsewhere in the Caribbean. That goes double for the Dominican Republic, where above-ground cave systems boast a wealth of native, pre-colonial Taino cave paintings and artifacts, and the underwater rivers that connect them remain largely untouched and unexplored.

Rath is one of only two cave instructor-trainers in the country, and a local cave-diving pioneer who has been an integral member of initial expeditions to explore and name the caves that comprise the Dominican Republic’s underwater-river network. A past expedition turned up a skull and bones from a previously unknown species of ancient mammal, which is now being studied by the Museum of the Dominican Man in Santo Domingo.

Rath is also a gregarious German who has spent more than two decades in the DR, owning and operating dive shops in every corner of the country. His latest operation, Uwe Scuba, is a custom dive center that has its storefront in the exclusive Casa de Campo resort, about 14 miles from Bayahibe. But don’t worry if, like me and most divers, you can’t afford Casa de Campo’s presidential digs — Bill Clinton, Jimmy Carter and George H.W. Bush all have vacationed here — Rath also makes house calls to meet divers who are down for a personalized, off-the-beaten-track experience.

Read the full article about this dive trip to Chicho Cave here on scubadiving.com

See video clip of cave diving in Dominican Republic below.

Watch an amazing video of cave diving in the Dominican Republic below.