The following article  highlights how both USSR and the US navy have marine mammal training programs. It is reported that dolphins and sea lions have been used for military purposes for over 50 years. 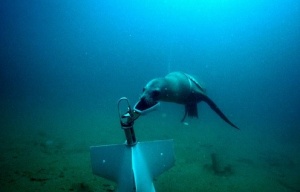 Marine mammal training programs have experimented with a number of species including orcas, elephant seals as well as sharks.  However, it was determined that bottle nose dolphins and California sea lions were  the most suitable species for their programs because of their trainability, intelligence and unique skill sets.

Dolphins, with their powerful sonar, were trained to mark underwater mines, retrieve lost items as well as to protect warships from enemy swimmers.

More recently a beluga whale , believed to have been trained by Russian military was discovered by a group of fishermen. The whale was found in Arctic Norway with a camera harness strapped to its body.

Watch the feature story in the video clip below.

Read on for more details about these amazing mammals

The idea of harnessing these creatures’ unique abilities for military use began in 1960 in the U.S., when the Navy acquired a Pacific white-sided dolphin in order to gain inspiration for better torpedo designs from the dolphin’s hydrodynamic form. Further studies of different dolphin species led to the realization that there was much more to learn from the animals’ exceptional abilities, including their natural sonar and their tolerance for diving to impressive depths. This led to the birth of the Navy Marine Mammal Program, designed not only to research the dolphins’ talents, but also to determine whether they and other marine creatures could be used to carry out certain tasks for the Navy. One of the first cases of a dolphin successfully completing a military task occurred in 1965, when a member of the program named Tuffy delivered tools and messages to the SEALAB II project 200 feet (60m) below the surface. In the same year, the USSR’s launched a marine mammal program in Sevastopol’s Cossack Bay.

Although the Navy Marine Mammal Program has experimented with using several different species including orcas, belugas, elephant seals and even sharks, both the U.S. and the USSR decided that for their trainability, their intelligence and their unique skill sets, bottlenose dolphins and California sea lions were the most useful species to their programs. The dolphins’ biggest asset is their powerful sonar, which far outstrips any human sonar technology, especially in shallow water where ship traffic and breaking surf often interfere with synthetic sonar devices. Both the San Diego and the Sevastopol dolphins are trained to detect underwater mines, which they mark for human mine-disposal teams by placing a weighted buoy line close by. Other tasks carried out by dolphins for these nations include retrieving lost items and defending warships against enemy swimmers, whereby the dolphins patrol moored vessels and alert trainers to the presence of any divers in the area.