There are certain tourist spots only available to scuba divers.

The Museo Subacuático de Arte is one such place. it is the worlds largest underwater museum. It isocated beneath the water in Mexico off the cost of Isla Mujeres.

This dive site is located 28 feet below the surface and is designed to support marine life and foster the conservation of the Mesoamerican Reef. The Mesoamerican reef is the second largest reef system in the world and it is considered endangered. 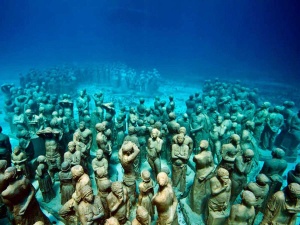 The site has a number of works on display, the largest of which consists of 450 life-sized sculptures representing local residents of the artist’s home town of Puerto Morelos.

Roberto Diaz Abraham is one of the founders who began the project in 2009. He describes it as an “art of conservation.” It was built to protect the endangered Mesoamerican Reef, the second-largest barrier reef in the world.

The scultures hold special nooks and crannies that support the breeding of marine life while providing a safe habitat.

Taylor is responsible for a large portion of the works. He modeled the sculptures after local residents of his hometown, Puerto Morelos.

To promote coral growth, he covered his sculptures with a marine-grade cement consisting of a PH-neutral surface. As a result, the statues have become covered in algae and coral to make them look even more spectacular.

Watch this amazing video presentation of 15 Underwater Museums & Sites that you must visit before you die.