Cave divers are a breed of scuba divers unto themselves.

They live for the thrill of exploration that comes from a form in inner mastery.  One of the biggest challenges ave divers face is the conquering of their mind. Cave divers train to overcome their fears and expand their comfort zones.

“Cave Diving is all about expanding your comfort zone, step by step,” says Patrick Widmann, an advanced cave diving instructor in the Dominican Republic 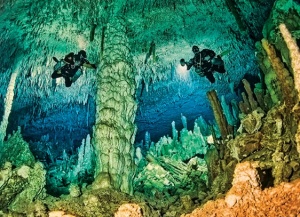 There are 5 courses recommended for cave divers to master.

“These Five Courses Will Help You Discover a Deeper Self — Literally”

The Cavern Diver course stresses the perfection of a diver’s buoyancy techniques as is required to safely navigate ib overhead environments where a variance of as little as 3ft would put you on the ceiling or floor of a cave.

Read on below for more cave diving course insights.

All must relearn buoyancy, given that the jump from open water to overhead environments can be jarring.

“Open water is very forgiving,” says Richards. “Vary 3 to 5 feet and it’s no big deal — but in a cave, that can put you on the floor or ceiling.” To help divers cement a new buoyancy foundation, focusing on fine-tuning trim and breathing, Richards instructs in north Florida’s cave systems. These caves better prepare students for one reason: They have flow. On entry, divers power against a current measured in millions of gallons per day. “Flow affects everything — trim, buoyancy, propulsion,” Richards says.

chards’ favorite classroom is Devil’s Den in Williston, Florida, about 100 miles northwest of Orlando. This cave extends 35,000 feet and flows at 42 million gallons per day.

“Train in complex environments and you’ll easily go anywhere that’s not as challenging,” says Richards. “If you know what Devil’s feels like, you can get a sense of other places.”

On the return route, these caves present yet another challenge. “With flow behind you, you have to anticipate buoyancy-control changes before they’re needed,” says Richards. “As I approach the exit at Devil’s Ear, it’s imperative I make buoyancy changes before that change in depth — otherwise, if I’m neutral, with flow behind me, I’ll have a sudden rapid ascent.” 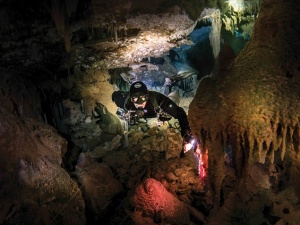 But even this situation is one that students build up to, starting at Ginnie Springs, 80 miles west of Jacksonville, or an hour north of Devil’s Den. Ginnie, another high-flow cave, is even better suited to beginners thanks to its flow of 35 million gallons per day and a coarse-sand bottom.

For new cave divers, almost always guilty of kicking too much, this means their zealotry won’t result in a fog of silt and lost visibility for too long. But causing a silt-out is part of the process; divers gain an understanding of what it feels like to have successes and failures. Says Richards, “This isn’t a course where I expect divers to come in and know what they should be doing — it’s a time where a lot of mistakes can happen.”

One of the first things aspiring cave divers must get used to is starting expeditions in the middle of nowhere — often a field or forgotten forest, reachable only by two-track dirt roads. To access Mermaid’s Lair, one of cave diving instructor Cristina Zenato’s favorite classrooms, start by heading to the eastern side of Grand Bahama.

“Old Freetown Road is abandoned,” says Zenato. “It used to connect the two sides of the island, and now it’s just a very nice, scenic drive that adds to the adventurous feel.”

Mermaid’s Lair is worth the trek due to how well it suits the needs of beginners. For starters, Zenato rerigged the ropes running through the cave.

“I changed the line, so it’s continuous, with no navigational changes — you can’t take jumps or turns.” Neither of which is allowed in the intro course.

In other words, getting lost would be pretty hard. Nor is depth an issue: Mermaid’s Lair dips to roughly 70 feet, giving divers ample time to practice buoyancy and what Zenato considers the key skill to begin developing at this level: global awareness.

“When you’re cave diving, you can’t think about just one thing,” she says. “You have to be like a little computer, calculating all these things at once, like the line, the light, the cave — and your buddy.”

Part of global awareness is taking in the environment — and that can mean appreciating the scenery.

“In Mermaid’s Lair, the formations change from a rusty orange to a sheen of black to yellowish-white crystals — and then, all of a sudden, everything is covered in black crystals. You don’t expect it to be so different in such a short environment,” says Zenato.

It’s something she’s reminded of nearly every time she shares the cave with someone new. She can hear the “ooh” through the regulator. And afterward, reactions vary wildly.

“Some people talk nonstop, and some are silent, and I can tell their hearts are so full with what they just experienced,” says Zenato. “Either way, I know when they’re hooked.”