More than 150 aircraft  rest on the ocean floor of about 130 feet down on the Kwajalein Atoll and Roi-Namur.  These are aircraft that were taken there and dumped , they were not planes that crashed. They were simply dumped there as it was cheaper than shipping them back to the US. 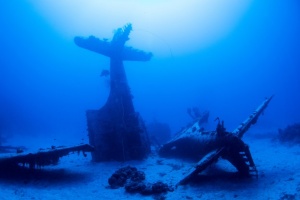 The site is very popular for Scuba divers with over 70 charted wrecks many of which are covered on coral and other underwater sea-life. The site is referred to as an underwater grave and is the largest of its kind in term of the number of wrecks in close proximity.

In a perfectly executed World War II mission that took place at the end of January 1944, U.S. forces defeated the Japanese at a little-known outpost in the Marshall Islands called Kwajalein Atoll. As part of the effort to win control of this crucial gateway to the Japanese empire, U.S. aircraft bombarded Japanese supply ships in the lagoon at Kwajalein for several weeks prior to the attack, sinking most of them, some still at anchor, and others as they attempted to escape.

Little is left of the battle of Kwajalein except these silent wrecks still lying at the bottom of the lagoon where they were defeated, out of sight and forgotten until now. After the war no one would’ve had interest in the aircraft and no scrap yards nearby, they were dumped here rather than shipping them back to the United States, as it was a cheaper solution.